Rick Steves recommended that we spend at least a few days in Santiago de Compostela, and I am so glad that we followed his advice. It is a beautiful city with good museums that tell the history of the Camino. There were other churches and cathedrals on the spot where the present-day Cathedral stands.

On our first full day in Santiago de Compostela, we went to the pilgrim office. This is where you receive your  certificates or Compostelas, official recognition that you have completed the final 120 kilometers (or more) of the Camino on foot. We stood in front of the big Cathedral gates to take a photo of each other at that wonderful moment. Having walked the final section of the Camino, I very much hope that life will allow me to return to walk some of the other portions, as well as the final 120 km again. This time I hope that our music director and my husband, Franz Vote, will join me for the journey. Here are Jim and I on that joyful day: 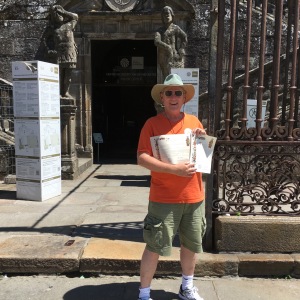 Santiago de Compostela is a very old city. I enjoyed the unspoiled quality of the old stone buildings on narrow cobblestone streets. One of my favorite things to do in a new city is to just wander around spontaneously without any particular goal in mind. For me, the main thing was to take in the flavor of this historic place and what it has meant to millions of people who have gone before us from the Middle Ages to the present. Being able to feel this connection is worth every step to arrive here.

Jim also had a birthday during our stay in Santiago de Compostela. I took him to dinner at the restaurant in the basement of the Parador. There was a wonderful guitarist who provided live music that evening, including several of Jim’s favorite songs:

Beautiful wall in the Santiago Parador – highly recommended as a place to stay! 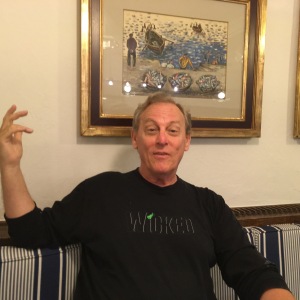 Jim and Linda celebrating his birthday with a lovely dinner of paella. The guitarist who played was wonderful, which made the evening even more special.

We headed to Barcelona by train in the early morning of the fourth day in Santiago. As I’ve mentioned before, there is a certain amount of real life that intervenes on a pilgrimage. No sooner had we arrived at the train station in Santiago than the ticket salesperson informed me there were no reservations available to Barcelona that day! We hadn’t even enjoyed a first coffee before the shock hit.

Would Jim have to travel on his own to Barcelona with me to follow on an overnight train? Or would he go alone by train, while I flew to Barcelona? This was a moment in which both of us were pretty upset. If I had it to do again, I would have made the my train reservations for the Eurail Pass well in advance, as you can do so at any train station in Spain. My calculation that I could get a reservation on the morning of the trip had clearly been iffy!

This was a morning on which my ability to speak Spanish became critical. Rather than give up, I spoke at greater length with the first ticket salesman and his colleague, then proceeded to the tourist travel office near the tracks. I believe that if I had been a tourist without any Spanish-speaking skills, I would have been stranded. So my recommendation for anyone planning to travel the Camino is that you take a serious Spanish course for at least one year beforehand, if not 2-3 years in advance.

What transpired is that I ultimately got reservations. In the end, the only issue was that I had to change seats several times in the course of the coast to coast trip to Barcelona. This was a small price to pay for being able to travel on the same trains as Jim. We arrived safely in Barcelona late that night and were able to check into our pension at the anticipated time.

Barcelona is the biggest city that I visited in Spain. With temperatures of nearly 100 F and 96% humidity, it was fairly uncomfortable. And the city was bursting with visitors, such that we could barely move along The Ramblas, which is Barcelona’s main street. Nevertheless, we had an amazing 3.5 days in Barcelona before flying home. And the highlight of the visit for us both was Antoni Gaudi’s Sagrada Familia (Holy Family Cathedral). More on this in the final installment coming soon.

Yale Whiffenpoofs Guest in the Immaculate Heart Chapel on January 12, 2017... Reflections on the Camino
Scroll to top