André García-Nuthmann is a tenor in the New Mexico Bach Chorale and a professor of voice and choral singing at New Mexico Highlands University. He also serves on the NMPAS Advisory Board.

At an early age, André’s mom got him into youth choir and choral singing at their church. She was an excellent singer herself, a light lyric soprano, and she also played piano for her entire life. Thanks to his mother, singing has always been part of André’s life.

But his musical training began with piano. The family was living in El Paso, Texas. He was 5, and his mom was taking piano lessons. André wanted to play piano, too, so his mom and dad found the best piano teacher in El Paso, Mrs. Morrison. Through her, he studied piano and elementary music theory. She believed he had the potential to become a pianist and professional musician.

André’s first public performance was at an El Paso bank with a big piano. He was really nervous playing his first recital before a pretty big audience.

His parents invested a lot in his music education. He has severe dyslexia. Music became his passion and the means of handling his difficulties with reading.

André’s father was an amateur violinist and loved Bach; they listened to a lot of classical music in the evenings. At this time, André began to explore writing music, as well.

He earned his bachelors in piano performance at Southwestern University in Georgetown, Texas. After that, he was accepted into the piano and composition program at the Mozarteum in Salzburg. Karl Wagner was his piano instructor, and his composition instructor was Cesar Bresgen, a student of Igor Stravinsky.

During study in Salzburg, he also sang with the Liedertafel-Chor, whose director was Dr. Kurt Prestel. Dr. Prestel encouraged him to study voice, and his first serious vocal training took place at the Mozarteum.

After returning to the US, André started a double masters in piano performance and piano accompaniment at University of New Mexico. He had two piano teachers, George Robert, who was a native of Vienna, for solo piano, and Rita Angel for accompanying. At UNM, André played for a lot of singers, including Kurt Streit, who later became a well-known tenor. He learned a lot about singing, vocal technique and repertoire during masters study.

One of his UNM professors, David Barela, also noticed Andre’s vocal abilities and encouraged him to study voice. In particular, he noticed the lyric tenor’s facility with coloratura, a style involving ornate and florid passagework.

His first professional work as a singer was with the Santa Fe Desert Chorale. He sang under the direction of founder Larry Banfield and several others, including Linda Mack. André was a member of the Desert Chorale for six years before deciding to move on.

Singing with Desert Chorale was hard for him, because the sound they were looking for was that of a boy’s choir. He feels much more comfortable with NMPAS Artistic Director Franz Vote’s preference for singing with the full voice. André’s voice teacher, Regina Sarfaty Rickless, also insisted that he learn to sing with his full voice.

In 1990, André was hired to take over the choral and vocal departments at New Mexico Highlands University. He felt that he should complete a DMA in voice, and Highlands was very supportive of that goal. He applied to Arizona State University, where he studied with tenor David Britton. Britton had sung with the Bach Aria Group in New York, which is where Andre first coached with him. Highlands gave him a three-year sabbatical to pursue on-campus study with Britton at Arizona State in Tempe, Arizona. He wrote his dissertation on Jean Berger and, in 2005, received his DMA. “Pursuing a DMA was the best decision of my life,” he said.

Other singing credits include two years with the Santa Fe Opera Outreach Program. He teamed up with Janice Felty and another colleague, and they performed at schools across the state. André particularly loved singing for young American Indian children on their Reservations and, being Hispanic, he was thrilled to sing for kids in Española. He became a role model for young Hispanic kids and wonders if any of them pursued careers in music later on.

Other solo opportunities include Haydn and Mozart masses with the Santa Fe Symphony, Santa Fe Pro Musica, Canticum Novum with Music Director and Conductor Ken Knight, Opera Southwest, and NMPAS. NMPAS means a great deal to André – he’s been able to sing repertoire that he would never have had the opportunity to perform otherwise.

At this point in his career, André wants to keep his voice fresh and in good condition. This is every singer’s challenge as he/she gets older.

“I am aware that the opera world is looking for younger singers,” he said. His biggest setback has always been his height – he was cast in Bedrich Smetana’s Bartered Bride as a member of the “short cast.” (The stage director had a “tall cast” and a “short cast,” because the tenor must always be taller than the soprano!)

In terms of future goals, André particularly wants to continue singing with Franz Vote and the New Mexico Bach Chorale. NMPAS is such a satisfying part of his musical life, “a real godsend,” as he put it. Doing Gounod’s, St. Cecilia Mass with NMPAS was a highlight of his career. Singing the role of Alfredo in La Traviata is something he hopes to do in the future; it would be wonderful if that could happen.

Andre’s singing career has been impacted by COVID-19, and the same is true of his students at Highlands. Everything shut down overnight. He has a teaching job that helps him to survive financially.

During the COVID-19 emergency, he’s had time to reflect on his life, to practice, to learn music, and to ensure that his voice stays healthy. For his students, who feel that their life is over, he has become more of a mentor than a voice teacher. He encourages them to take advantage of this time for their own study.

Learning how to teach on Zoom has been challenging: Voice lessons on Zoom are not ideal, because the delay makes it impossible for him to accompany them on piano. He’s been making tapes of their piano parts for them the practice with, and this has been good for his playing.

But he also asks his students to sing without accompaniment. He’s focusing on intonation and vocal quality. At the end of the semester, several students mentioned how much they appreciate the detailed work he is doing with them.

Since his Highlands and Las Vegas Community choirs have chosen not to meet next year, he is designing virtual choral projects for them. He surveyed his members, and most said they would not be comfortable with meeting in person.

A quartet of NMPAS singers hopes to present “Zarzuela in The Plaza Ballroom” again this year on September 25, 2020. Much depends upon whether they can perform before a live audience in late September or they need to present the program via live stream. André specializes in zarzuela, which is also known as “Spanish operetta,” and is very popular with audiences in Las Vegas and other New Mexico cities and towns. 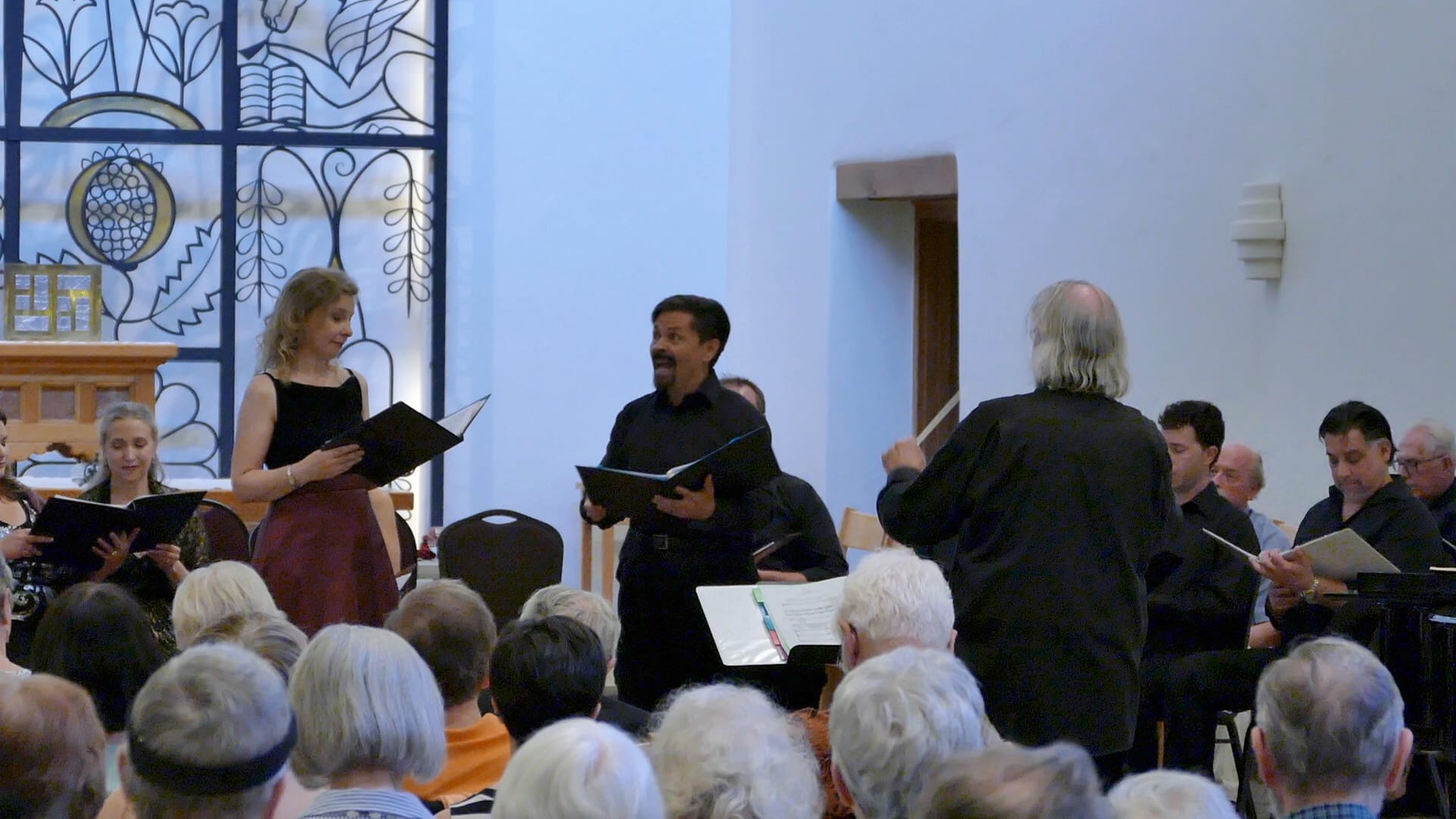