“I really think of Bach as the touchstone of Western music. The understanding of tonality, the contrapuntal mastery, the stylistic range from buoyant to tragic – there is nothing like it. At the outset, Bach composed the WTC as an exploration of the new tuning system of Well-Temperament, which allowed composers to write in any of the 24 major and minor keys, without the performer needing to stop and return the instrument. This had huge implications for chromaticism and harmonic modulations within a piece. It opened up enormous expression of harmonic language.

I think people should listen to the emotional content of Bach, first and foremost. Of course, they can also listen his counterpoint – the fugues in WTC I range from one in 2-voices all the way up to a masterful 5-voice triple fugue. There are so many Baroque dances that Bach uses as the basis for the Preludes. It’s like a master class in the Western musical tradition.”

A Life in Music

Jacquelyn Helin grew up in Wilmette, Illinois, a North Shore suburb of Chicago. Her mother was a fine musician and had a masters degree in piano from Northwestern University. Her mom began to teach her piano at age 3.

Jacquelyn always loved playing piano. She was reading music before she could read words. As a toddler, her favorite toys were a toy keyboard and kiddie record player.

As a child, Jacquelyn performed constantly in recital and at church. Her mom was also a church musician. Everyone assumed that Jacquelyn would be a musician, too.

I asked her about her own daughter and son. She responded that her two kids are very musical, but have pursued other interests. However, they love music and grew up both making it and hearing lots of it.

Jacquelyn started college as a Philosophy major at North Park College, a small liberal arts school in Chicago. During that time, she continued to play piano seriously. She studied with a Juilliard graduate on the faculty at North Park. After completing her first year, however, Jacquelyn realized that she wanted to be a music major, which meant transferring elsewhere. Her family had moved to San Francisco when she was 12, and she loved the West. So Jacquelyn applied and was accepted to the University of Oregon in Eugene.

She also chose University of Oregon because Robert Trotter was Dean of the School of Music. Meeting him was a life-changing experience. Trotter had made such an impression on her that she felt this was where she needed to be. Victor Steinhardt was her piano teacher. Robert Trotter told her about Yale and, after she completed her bachelors in Eugene, suggested that she apply there for masters study.

At Yale, Jacquelyn studied piano with Donald Currier. She loved a lot of things about Yale, however Yale was not an easy place for women in 1974. There were five women in the Piano Department, all of whom came in at the same time. Two left almost immediately. Nevertheless, she had intended to get her masters at Yale.

But an old swimming injury made it necessary for her to have eardrum replacement surgery. After her operation, which took place in California, she was studying piano with Adolph Baller, who had played with Yehudi Menuhin in Europe. She was learning so much from him that she decided not to return to Yale. He suggested that she apply to Stanford, where he was on the faculty. She got her masters at Stanford and loved it there.

Jacquelyn then decided to pursue a DMA at University of Texas at Austin, because that is where John Perry taught piano. She had heard several of his students, whose playing she really liked. Jacquelyn went to meet him and spent three years on campus, getting her doctorate.

John Perry was a brilliant pianist himself, as well as one of the finest teachers in the world. John was fun, incredibly articulate, and opened many aspects of piano playing to her through his insights. They lived, ate & drank piano in those days. The pianists in his studio were family.

It turned out that Jacquelyn’s son William Helin-Glick went to University of Texas at Austin for college, too, a very happy association for them both.

During doctoral study, Jacquelyn participated in the Aspen Music Festival for three years and, after that, was invited back as an artist. She had met a lot of people from New York. With her new connections, she thought that she could make it in New York as a performer. Of the Festival, she said, “Aspen was so fantastic – to be surrounded by that excellence, living and breathing this musical experience.”

Jacquelyn was certain that she didn’t want to stay in academia. Although she was offered a university teaching job, she turned it down and moved to New York instead.
She spent 11 years in New York City. Initially, she played a lot of chamber music and taught privately. She was also a teaching artist at the 92nd Street Y and at Lincoln Center Institute. For performances at Aspen, she met the American composer Joan Tower, and they became friends. Tower wrote her Piano Concerto for Jacquelyn, who premiered it with the Hudson Valley Philharmonic.

She also met Aaron Copland and Virgil Thomson in New York. Virgil Thomson became a friend, and they remained close until his death in 1989. Jacquelyn recorded his music on the Musical Heritage and New World labels. He was very good about telling her how he wanted his pieces to be played: If it wasn’t in the score, then the performer was not to “add it in.”

She knew Aaron Copland quite well, too. For years she played his Piano Sonata, and performed his Sextet multiple times. Copland wrote her a lovely note about her performance of the Sextet, which meant a lot to her.

Jacquelyn notes that Aaron Copland and Virgil Thompson helped to define American music in a new and beneficial way. Their compositional style is unmistakably American. And when they were young, they worked very hard to get their music heard and performed.

Jacquelyn’s performing credits from this period include London’s Wigmore Hall (1982). Lots of solo concerts and concerto dates came her way. In 1984, she won the Artists International Competition, which provided her with a Carnegie Hall Recital Debut.

Her life eventually consisted of touring, rather than being in one place. She performed up and down the East Coast, in Chicago and in the Midwest. She met her husband Robert Glick in Washington, DC, when he was working at the Folger Library. He subsequently moved to New York to be with her.

Jacquelyn and Robert relocated to Santa Fe when their first child, a daughter, was 9 months old. Robert had been hired by the Santa Fe Opera as Director of Development. Jacquelyn still remembers buying her daughter’s first pair of shoes before they got on the plane. Back then, they thought of their time in Santa Fe as their “Southwest Adventure.” They will soon begin their 3rd decade in Santa Fe and love it here!

When they arrived in Santa Fe, Jacquelyn continued touring. She was on the WESTAF roster and performed extensively throughout the Western states; she also continued to play quite a few concerts back east.

Even when their second child was born, she continued to tour with “both kids and an au pair.” This lasted until their daughter was ready for 1st grade. At a certain point, the balance had to shift and so, Jacquelyn began to teach more and travel less; she concentrated on performing closer to home. Now that both kids are grown up and no longer in college, she is teaching less and playing more.

Their children are currently living in hot spots. Her daughter lives in Oakland, CA and her son is based in Houston, TX. They are in their 20s and working from home. For kids their age, COVID-19 has been very hard. Careers are stalled, and everything is in a holding pattern.

In July 2020, William had a piece published in the Santa Fe Reporter. It’s a cover story about taking part in a Black Lives Matter protest in Houston and being arrested. What Jacquelyn loves about young people today is that they are very involved in social issues, even during the pandemic. She has felt the most optimistic about the major issues of the day by watching young people take them on.

Jacquelyn Helin became a Steinway Artist while still living in New York. She was originally a Bösendorfer Artist. But she still owns a Hamburg Steinway, which she bought in 1976 for $12,000. It came through the port of Oakland, and she was surprised when she had to pay an additional port tax of $1,000! (Today that piano would cost about $170,000 – she’s always been grateful she bought the piano when she did!) Jacquelyn switched from Bösendorfer to Steinway, partly because of her own instrument, and partly because so many stages in the US have Steinway pianos. There are definite advantages to being a Steinway Artist, and she loves their instruments.

When asked about her favorite repertoire for piano, she responded, “You would need multiple lifetimes to scratch the surface of the solo piano repertoire.” Yet different music speaks to an artist at different points in their life, and sometimes opportunity dictates the choice of repertoire. As a student, for example, she played a lot of contemporary music. Her DMA dissertation was on the piano music of Stefan Wolpe. On the other hand, her Master’s thesis was on several piano sonatas by Franz Joseph Haydn.

At this point in time, she is principally drawn to works for their emotional content. She wants to tackle the pieces that really speak to her. In New York, she worked with lots of living composers and enjoys the process of premiering a new work.

She likes a wide variety of music – for her courses at the Renesan Institute for Lifelong Learning, she picks one composer and focuses on his or her life. This year she chose Beethoven in celebration of the 250th anniversary of his birth. She loves talking about the composer and playing that his/her music for people. Jacquelyn’s Renesan courses draw large audiences, and for good reason!

Regarding the music of Johann Sebastian Bach, Jacquelyn has always loved his music. The Well-Tempered Clavier project came up quite naturally, as a byproduct of her interest in the work. She had learned a lot of it prior to coming up with the idea of performing all of Book I. And she plans to perform all of Book II in the near future!

Regarding the Suzuki method, it can be a challenge for students who started with Suzuki to transition into reading music with facility.

On the topic of reading music, dyslexia is also a big issue. Over the years, Jacquelyn’s students have run the gamut from reading music very fluently to major difficulties in reading a score. She has worked with quite a few students between the ages of 8 and 13, and notes some kind of cognitive development that occurs at age 13 and helps to get them over the hump.

Starting in mid-March 2020, all of her teaching has been on Zoom. On July 1, she opened up her studio for adult students who felt they just couldn’t “do tech.” It’s a whole different teaching style with social distancing and masks, however.

The upside of COVID is that she’s had more time for her own practicing. Jacquelyn has memorized all of Book I of Bach’s Well-Tempered Clavier, though she doesn’t plan to perform it by memory at her NMPAS recital on August 29th.

Other benefits of COVID-19 include time to think, reflect, and slow down. We have no idea how the pandemic will affect life in the long term. But “when we can once again gather for concerts, this will be so important for people in community,” she said. 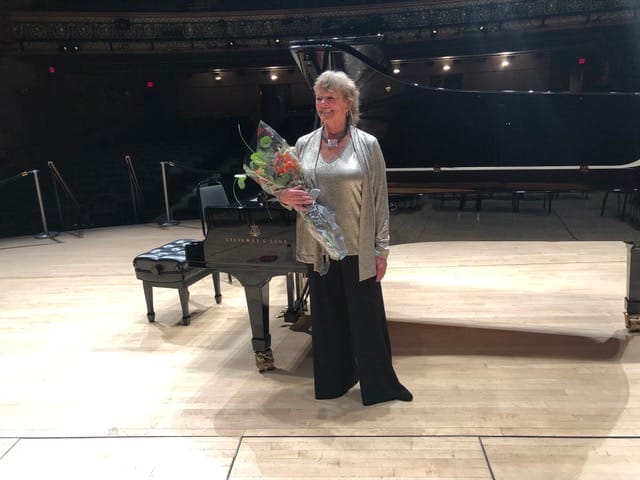 Artist Profile: André García-Nuthmann Getting to know the artistic leadership of NMPAS!
Scroll to top