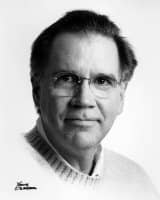 Many Santa Feans may not realize how lucky we are in New Mexico to have internationally recognized conductors like Franz Vote as members of our communities. Maestro Vote is among those who have brought a lifetime of experience to New Mexico. As you will see, Franz Vote’s family on his father’s side has a long history in the Land of Enchantment, and he is writing a new chapter in their story.

A native of Los Angeles, California, Franz’s earliest memories are of sitting next to the string bass player at a session his sister Sharon, an excellent singer, was involved in. She was much older than Franz – he was just 3 at the time. Yet this made a deep impression on Franz, whose own singing voice happens to be in that same range!

Franz’s older brother Fred also loved classical music, as did their mother. Fred used to do his homework while listening to classical music and Franz, 14 years younger, listened with him.

His formal musical training began with piano lessons, but they were interrupted until age 11, when he finally had the opportunity to study piano and master the keyboard. Franz also studied opera scores from the age of 7, including Richard Wagner’s operas. Additional study of viola and clarinet, as well as voice, helped Franz to become a well-rounded musician well before college.

Franz Vote majored in piano and composition at California State University at Northridge and received his Bachelor of Music there. He then went on to teach, play and conduct at the Aspen Music Festival, and was on the faculty of the Eastman School of Music before pursuing a career in New York City and Europe.

Maestro Vote believes in the kind of apprenticeship that produced the great European conductors of the 19th and 20th centuries. And that is how he acquired the skills that led to an invitation to join the conducting staff of the Metropolitan Opera, where he worked from 1990-2001. Prior to that, he moved to Germany and secured his first position at the Theater im Revier in Gelsenkirchen. From there, he went on to the opera house in Aachen, Germany, and took a position with an American opera touring company to conduct over 200 performances of Bizet’s Carmen throughout all of Western Europe. 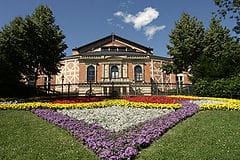 Maestro Vote met his wife, flutist Linda Marianiello, in Munich, Germany while touring with Carmen. He then obtained a position as a conductor and repetitor at the Bavarian State Opera am Gärtnerplatz in Munich. A colleague at the Gärtnerplatz Theatre heard of an opening at the Bayreuth Wagner Festival and recommended Franz. He joined the music staff in Bayreuth for three summers as assistant to James Levine and Daniel Barenboim. And that is how he came to be invited to join the Metropolitan Opera music staff by James Levine in 1990.

Franz Vote made his Metropolitan Opera debut in Madama Butterfly in 1995 and became James Levine’s go-to conductor when he was ill or unavailable. Franz stepped in for Maestro Levine with two hours’ notice to conduct the premiere of Tales of Hoffmann. He also conducted Elektra, Un ballo in maschera, and La forza del destino at the MET, as well as the 1996 New Year’s Eve Gala.

Placido Domingo invited Franz Vote to conduct the finals of his Operalia competition in Tokyo with the Kanagawa Philharmonic Orchestra in 1997. In 2000, Seattle Opera invited Maestro Vote to cover the Wagner RING because their chief conductor Armin Jordan was in poor health. Maestro Vote took over performances of the first two RING operas that summer and was invited back as conductor for the complete RING cycle in Seattle in 2001.

In addition to performing as an opera conductor in all of Western Europe, Japan and China, Franz Vote has been a guest conductor for many regional opera companies in the US, including Orlando Opera, Opera Naples, Opera Memphis, Nashville Opera, and Sarasota Opera.

Franz Vote’s family roots go back to the Pecos Wilderness of New Mexico in the early 20th century, where his paternal grandfather was a forest ranger beginning in 1902. Franz’s father was born and grew up in old Santa Fe. As a child, Franz and his brother Fred made many trips to New Mexico. Fred worked in Los Alamos for 5 years. Franz continued to visit him all through high school and college, traveling to New Mexico from Los Angeles on his motor cycle!

So when Maestro Vote was ready to retire, Santa Fe and New Mexico were the place he wanted to settle. In 2009, he and his wife Linda purchased a home in Santa Fe and have never looked back. The big surprise for them, however, is that other colleagues from their professional lives began to show up in New Mexico, too. They were all retiring here and wanted to continue to make music. Although the couple had not originally planned to resume their musical careers here, their friends talked them into founding NMPAS in late 2011. The New Mexico Bach Chorale, an all professional vocal ensemble of soloists, debuted in Santa Fe in May 2012.

Concerning the New Mexico Bach Society, which is central to the work of NMPAS, Maestro Vote had this to say:

“NMPAS has a unique role among performing arts groups. Our mission is to promote and discover local talent here in New Mexico. Most other organizations are averse to this concept and have adopted the attitude that great art must be imported to be valid. This mindset within artist management controls and limits what audiences can experience.”

Concerning New Mexico’s talented singers and instrumentalists, as well as fine and performing artists with whom he’s had the pleasure of collaborating, he said:

“Like all other places on earth, New Mexico has artists who have been born, raised and educated locally. Many of them exhibit real mastery of their discipline and, if given the opportunity, continue to grow in their art. There are, of course, performers who have come from other places and have chosen the Land of Enchantment as their adopted home. NMPAS is fortunate to have both kinds of artists on our roster. We are very proud to offer New Mexicans a chance to use their talents here, so that they do not have to leave the land they love.”

Franz Vote has brought NMPAS considerable recognition for the quality and intimacy of our programs. The musicians who perform with him have become a community that values the opportunities they have to perform under his direction. And they’ve had the chance to perform some of their favorite works, which they would otherwise not have been able to do, had it not been for Maestro Vote and NMPAS.

Now in season 9, Franz Vote wants NMPAS to continue well past his tenure. He will be closely involved in identifying the person who will succeed him as Artistic Director. With Executive Director Linda Marianiello, he hopes to ensure that NMPAS becomes sustainable and serves professional performers and audiences in New Mexico for many years to come.

Here are a few photos from the NMPAS 2020 Season Finale Opera Concert that took place on September 6, 2020. NMPAS is doing everything possible to offer our audiences great music this season via live stream, while also protecting our artists. Hence, even our singers are wearing special masks designed to interfere as little as possible with vocal production!